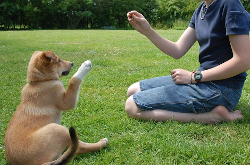 Americans own about seventy-three million dogs. Many people have problems training their animals. Some are turning to dog expert Cesar Millan.

Cesar Millan's television show is called "Dog Whisperer." It is broadcast in several countries, including the United States, Japan and Thailand. Millan has also written a book about his life and ideas about dog training. It is called "Cesar's Way: The Natural, Everyday Guide to Understanding and Correcting Common Dog Problems."

The TV show and book try to improve the relationships between people and their dogs. Millan also works with difficult dogs at his Dog Psychology Center in Los Angeles, California.

Cesar Millan says dogs are happy and calm when they know and trust their leader. He says dog owners must be the leader or the dog will become confused and act in anti-social ways. The animal might become uncontrollable. It may bark all the time or even bite someone.

Cesar Millan says the best way to train a dog is to prevent this behavior in the first place. He says the owner must be a good leader and provide a lot of exercise to keep the dog happy.

Pet owners call on him when they have a problem. These situations appear on his television show, "Dog Whisperer." Recently, he visited a home where the dog barked loudly when people used some cooking equipment. The dog was afraid of the noise, and its loud barking was interfering with the lives of its owners.

However, not all dog experts agree with all of Millan's methods. They say it is true that dogs need good leadership and a lot of exercise. But they say it can be cruel and dangerous to force a dog to face its fears as in the example we described. They say the animal might attack. Some dog experts are concerned about people trying the methods they see on television without getting good advice about their own dog.