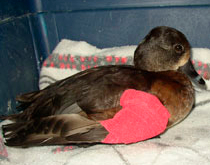 
This story/ is about a brown female Canadian duck/ that weighs/ only four hundred fifty grams. The duck/ had flown/ to the southern state of Florida/ for the winter.

A hunter/ shot it/ on January fifteenth/ and took it/ to his home/ in the city of Tallahassee. He put it/ in the refrigerator. Two days later/ the man’s wife/ opened the refrigerator door. The duck/ lifted its head/ and looked at her. It was alive!

The family/ took the duck/ to a doctor/ who treats animals. The doctor/ gave the duck/ to the Goose Creek Animal Sanctuary. Animal sanctuaries/ provide homes/ for animals/ and teach people/ about their care.

The doctor said/ it was easy/ to understand/ why people thought/ the duck/ was dead. He said/ ducks/ generally do not move a lot, especially after being shot. And he said/ its low body temperature/ helped it/ survive/ in the refrigerator.

That was enough/ to make the duck/ famous/ around the world. The Tallahassee newspaper/ published the story/ that was re-printed/ in many different countries. But that was not the end/ of the story.

Workers/ at the wildlife sanctuary/ named the duck/ Perky. And they arranged for the doctor/ to perform an operation/ to repair the duck's damaged wing. During the operation, Perky/ stopped breathing--not just once/ but two times.

The doctor/ tried to save Perky/ by giving her oxygen/ through a face mask. But he finally said/ the duck had died. A few seconds later, however, Perky/ began to move. Reports say/ the people/ in the operating room/ were so happy/ that they cried.

Workers/ at the wildlife sanctuary/ say Perky/ will not have any more operations. It seems/ she had a bad reaction/ to the drugs/ that were used. Perky/ is expected to live/ at the sanctuary. And a local company/ has begun to sell t-shirts/ showing a picture/ of the lucky duck. Money/ from the sale of the shirts/ will help pay/ for Perky’s care.