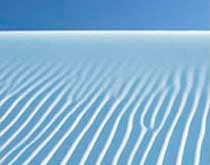 
One of the world’s great natural wonders is in the state of New Mexico, in the American Southwest. Nature has created huge moving hills of pure white sand. These sand dunes cover more than seventy-thousand hectares of desert.

It is one of the largest sand dune fields in the United States. The bright white sand dunes are always changing, always moving, like waves on the ocean. Driven by strong winds, the sand moves and covers everything in its path. It is like a huge sea of sand.

The sand dunes have created an extreme environment. Plants and animals struggle to survive. A few kinds of plants grow quickly to survive burial by the moving sand dunes. Several kinds of small animals have become white in color in order to hide in the sand.

Then, seventy million years ago, the Earth’s surface, or crust, pushed upward. The rocks formed two groups of mountains. Later, the crust pulled apart. The area between the mountains broke and fell down. It formed a half-circle shape of a bowl. This bowl of rock is known as the Tularosa Basin.

About twenty four thousand years ago, it rained a great deal in the area. The rain filled the Tularosa Basin and formed Lake Otero. The rain and snow that washed down the mountains into Lake Otero carried gypsum with it.

Later, Lake Otero almost completely dried up. Gypsum remained. A strong wind moved into the area. It blew across the land for thousands of years. Pieces of gypsum broke off. The wind wore them away to a size small enough to pick up and carry for short distances. Wherever the wind dropped sand, dunes formed.

Most gypsum would be carried away by rivers to the sea. But the Tularosa Basin is enclosed. No rivers flow out of it. So water with dissolved gypsum has nowhere to go.

Gypsum sand is being made all the time. The dunes continue to form and move under the influence of water and wind. Water continues to wash down from the mountains carrying dissolved gypsum into the Tularosa Basin. Wind continues to blow across the Basin carrying the gypsum.

The gypsum sand grains crash into each other. The crash creates tiny lines or scratches on the surface of the sand. These scratches change the way light shines off the surface. This makes the sand appear white. The sand dunes look like great masses of bright white snow. But they are not cold and wet. It only rains about eighteen centimeters each year.

There are four kinds of sand dunes at White Sands National Monument. Some of the dunes are small and fast-moving. They are called dome dunes because they are shaped like a half-circle. Few if any plants grow on them. These dunes move the fastest, up to twelve meters a year.

Other dunes are called transverse dunes. They form in long lines across the dune field. They can grow to be one-hundred-twenty meters thick and eighteen meters high.

Parabolic dunes are the opposite of barchan dunes. They form when plants hold sand in the outer parts of the dune but the center of the dune continues to move.

You may wonder how anything can live in this extreme environment of a white sand desert. There is not much rain. The heat in summer is intense. The sand lacks nutrients.

Yet almost four hundred kinds of animals live in White Sands National Monument. Many of them are birds or insects. There are also twenty-six kinds of reptiles, including rattlesnakes and lizards. And there are more than forty kinds of mammals. They include rabbits, foxes and coyotes.

Scientists know that plants and animals often change to be able to live in extreme environments. For example, they change color to protect themselves from enemies. Many of the animals that live in the sand dunes have become white. So it is difficult to see the animals in the sand.

Plants do grow in the White Sands dune field. But even plants that grow in most deserts have trouble surviving. A major reason is that the dunes bury any plants in their way as they move across the desert. Yet, a few plants have developed techniques to avoid being buried by moving sand.

For example, some plants grow taller and their roots grow deeper into the sand. The soaptree yucca plant can make its stem grow longer to keep its leaves above the sand. The plant grows up to thirty centimeters a year.

White Sands National Monument is about twenty four kilometers southeast of the city of Alamogordo, New Mexico. In the visitor center at the entrance of the park, you can find out about special activities and guided walks. From the visitor center, you can drive about thirteen kilometers into the center of the dunes. It is like driving on a lonely white planet. Along the way there is information that tells about the natural history of the white sands.

You can also explore the dunes on foot. There are four marked trails. Signs along the trail tell about the plants growing in the sand. You can see some unusual and beautiful plants and flowers growing in the sand dunes. But you may not remove or destroy any plants or animals at White Sands.

You can even camp there overnight. But you must be careful. It is easy to get lost in the waves of moving sand especially during sandstorms. There is no water to drink. The temperature can rise to thirty-eight degrees Celsius in summer. There is no shelter from the sun’s rays.

There is another reason to be careful at White Sands National Monument. The White Sands Missile Range completely surrounds the park. It covers one million hectares. The missile range was first used as a military weapons testing area after World War Two. It was used to test rockets that were captured from the German armed forces. The missile range continues to be an important testing area for experimental weapons and space technology.

These tests take place about two times a week. For safety reasons, both the park and the road from it south to Las Cruces, New Mexico may be closed for an hour or two while tests are taking place.