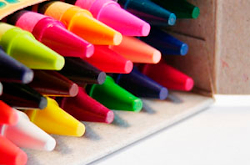 Generations of American children/ have grown up/ coloring and drawing/ with crayons/ made by the Crayola company. These small sticks of color/ are also popular/ around the world.

Hi, my name/ is Andrew Bracken/ and I am six years old. I like to draw neighborhoods and cities. Right now/ I am drawing an ice cream store. My favorite crayon colors/ are: pink/ is my first, purple/ is my second and blue/ is my last.

That was Andrew Bracken/ from Arlington, Virginia. He is one of many children in America/ who likes to draw/ with Crayola crayons. Many people/ use these fun drawing tools, but not everyone/ knows their history/ and how they are made.

The story of Crayola/ began in eighteen sixty-four. Joseph Binney/ started a company/ in the state of New York/ called Peekskill Chemical Works. The factory/ made products/ such as paints, dyes, and charcoal. Joseph Binney/ later asked his son Edwin Binney/ and another family member, C. Harold Smith, to work with him.

In eighteen eighty-five/ Joseph Binney/ retired. Edwin Binney and C. Harold Smith/ decided to become business partners/ and changed the name of the company/ to Binney & Smith. The company/ made products/ like red oxide, a chemical used to give color/ to the red paint/ used for painting barn buildings/ on farms.

Peekskill chemists/ also had an important role/ in how modern cars/ look. The first car tires/ were a white color/ because of the zinc oxide/ in the rubber. Peekskill experts learned/ that adding carbon black/ to tires/ not only made them darker/ but also made them/ much stronger.

In nineteen hundred/ the company/ started making slate school pencils/ in their factory/ in Easton, Pennsylvania. Binney & Smith/ started listening carefully to teachers/ who wanted better materials/ to use in their classrooms. The company/ soon made the first dustless chalk sticks/ for writing/ on school blackboards.

A few years later/ the company/ decided to produce safe and low cost wax crayons, which are coloring sticks/ that can be made/ out of wax, chalk or charcoal. In fact, “crayon”/ comes from the French word/ for pencil.

Crayons/ were not a new art material, but good quality ones/ were costly to buy. It was Edwin Binney’s wife Alice/ who invented the product name/ Crayola. The first part of the name/ comes from “craie”/ the French word/ for the material chalk. The second part/ comes from “ola”/ in the word "oleaginous"/ which means having to do with, or containing, oil.

Today, you can buy boxes of Crayola crayons/ with more than one hundred colors. But the first box of Crayolas/ only had eight colors: red, orange, yellow, green, blue, violet, brown and black.

If you want to understand/ how these famous colorful sticks/ are made, you can visit the Crayola Factory visitor’s center/ in Easton, Pennsylvania. The real factory/ where Crayola crayons/ are produced/ is no longer open/ to the public. But at the visitors center/ you can see older versions/ of the machines/ that make crayons. Listen/ as one of the factory’s guides/ tells about the company.

Hi, I’m Charlie Doherty. I work here/ at the Crayola Factory/ making crayons...well, showing people/ how we make crayons and markers. Crayola was founded, the crayon part of the company, in nineteen-oh-three. In two thousand three/ we had our one-hundredth anniversary.

We were the first/ to package eight different colors/ back in nineteen-oh-three. We had an eight pack. You know/ how many different colors/ we make now? Guess! How many? One hundred and a half. Yeah, they come in a tower.

Charlie Doherty/ can also show you/ how the many machines/ work/ that produce crayons. He starts/ by pouring hot paraffin wax/ that has been colored/ with pigment/ onto a special table. The hot liquid/ pours into one thousand two hundred thin container molds/ that are the shape of a crayon.

Then, Mister Doherty/ runs a scraper/ over the table/ to make sure/ the wax/ is evenly placed. As the wax cools, it keeps the shape of the crayon forms. Cold water/ helps cool/ the crayons/ more quickly. Next, he carefully takes the cooled crayons/ out of the forms. The ones/ that break or do not have perfect tips/ get melted again/ into the wax.

Charlie Doherty/ then shows the labeling machine/ that wraps small squares of paper/ around the crayon/ using sticky glue/ made from cornstarch. The paper/ helps strengthen the crayon/ so it does not break easily/ when used. The labels/ also give the name of the color.

Before these machines/ existed, local farmers/ put the colored labels/ on the crayons/ by hand. It was a good way/ for these families/ to make money/ during the winter. If you visit this factory, you can try to roll and glue the paper/ on a newly made crayon. It is not as easy /as it looks! Charlie Doherty says/ the farmers/ used to be able to put the paper labels/ on ten to twelve crayons/ a minute.

Next, there is a machine/ that puts crayons/ into small boxes/ made out of cardboard paper. The machine/ sorts the crayons/ so that every box has one of every color.

A whole history/ could be written/ about Crayola’s names/ for its many colors. Over the years/ Crayola/ has renamed three of its colors/ to be more "politically correct"/ and not risk insulting some groups of people. These include “Prussian blue”/ which became "midnight blue," and “Indian red”/ which became "chestnut." In nineteen sixty-two/ the company/ changed the color “flesh”/ to “peach.” The Crayola Web site says/ this was partly a result of the civil rights movement/ in the United States/ during the nineteen-sixties.

It might surprise you/ to learn/ how seriously/ some people/ take their crayons. In nineteen ninety/ Crayola/ decided to retire eight colors/ including "raw umber," "maize"/ and "lemon yellow." The company/ did not expect/ that many adults/ who grew up with those colors/ would be very upset.

Some people/ even protested/ in front of the Crayola headquarters. People/ organized themselves/ into protest groups/ like “RUMP.” This stands for the "Raw Umber and Maize Preservation Society.” Another protest group/ was called/ “The Society to Save Lemon Yellow.”

Crayola/ did not return the eight old colors/ permanently. But they did create special edition metal boxes of crayons/ that included the newly retired colors. They sold/ hundreds of thousands of those tins.

You might be wondering/ who names all these colors. Crayola/ has three main ways/ for finding new names. Sometimes/ the company/ uses a book/ from the United States Commerce Department/ called “Color: Universal Language and Dictionary of Names.” This book/ is used/ by experts/ in industries/ like biology, botany, and home designing. Crayola/ also gets names/ from colors/ used by artists.

Sometimes/ Crayola/ asks its workers/ for color ideas. Their suggestions/ include "pig pink"/ and "blue bell." Crayola/ has even asked its buyers/ for color name ideas. In nineteen ninety-three/ Crayola/ held a competition/ for new names.

Adrienne Watral/ was six years old/ at the time. She named an orange crayon/ after her favorite food, "macaroni and cheese." Eighty-nine-year-old Mildred Sampson/ picked the name/ “purple mountain majesty.” This phrase/ comes from a famous song/ about America, but it is also the perfect name/ for a color.

Crayola/ recently started writing the names of each color/ in Spanish/ as well as French. So, now/ when you pick up the blue color “cornflower”/ you can improve your language skills. Cornflower/ is “azul aciano”/ in Spanish/ and “bluet”/ in French.

Crayola/ is not the only company/ that makes crayons. For example, the Swiss company Caran d’Ache/ makes many kinds/ of high quality art products. These include colorful drawing sticks/ like oil pastels/ and wax pastels. This company’s products/ are mostly for professional artists and designers.

The company Dixon Ticonderoga/ makes Prang crayons/ out of wax/ and also out of soybean oil. Some people/ buy soy crayons/ because the colors/ are very bright/ and are good for the environment. These other companies/ might make similar products. But Crayola crayons/ have their own special place/ in the popular imagination of generations/ of Americans.

We leave you/ with the words/ of Daisy Bracken. She can tell you/ exactly which Crayola colors/ are special/ to her. "My name is Daisy/ and four years old. Sometimes/ I color/ with crayons. I like indigo, green and purple and pink and red and I like yellow and blue and green and I like brown…."