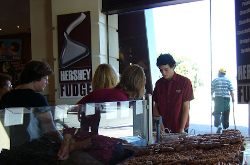 
People around the world know and enjoy the chocolate candy from the Hershey Company. Company officials say they export Hershey's products to more than ninety countries. The Hershey Company celebrated an anniversary earlier this month in its hometown, Hershey, Pennsylvania.

The street lights in Hershey, Pennsylvania are shaped like the candies the company is most famous for -- Hershey’s Kisses. July seventh was the one hundredth anniversary of the Hershey's Kiss. The company held a birthday party in its honor.

Hershey officials say the huge chocolate Kiss took one hundred fifty-two people nine days to produce. And they say the chocolate in it is equal to that of more than three million normal Hershey's Kisses.

The company began producing the chocolate with the unusual shape in nineteen-oh-seven. Officials today do not really know why the new candy was named a Kiss. One possible story is that the name came from the sound or motion of the chocolate during the manufacturing process.

Workers used to wrap each candy in a small piece of silver foil paper by hand until nineteen twenty-one. Then a machine was developed to do that. Today, the company produces more than eighty million Hershey’s Kisses every day. And modern wrapping machines finish the job. They can wrap more than one thousand Kisses every minute.

Some Hershey’s Kisses have remained the same over the years. But there are also many new versions. There are Kisses with an almond nut inside. Dark chocolate Kisses. And Kisses filled with caramel or peanut butter. There are also similarly shaped brown and white candies called Hugs.

Hershey’s Kisses are produced in Pennsylvania, California and Virginia. Recent news reports say the company will soon close one of its factories in California. The reports say the Kisses will be produced at a new Hershey factory in Mexico. They also say the candy company has closed at least three other factories this year.