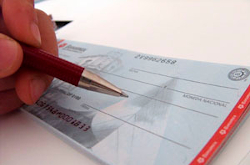 One of these problems/ is difficulty/ using equipment and tools, like scissors. In general, most tools and equipment/ are made for people/ who are right-handed. The Left-Handers Club/ tries to educate designers and manufacturers/ to consider the safety/ of left-handed people/ when producing their products.

Another problem is/ that many societies/ have considered it bad/ to be left-handed. Some teachers and parents/ have tried to force children/ who used their left hand/ to use their right one instead.

Scientists/ do not really know/ why some people/ are left-handed. They have believed/ the reason/ is genetic. Researchers/ in Britain/ recently identified a gene/ that helps confirm this. Scientists/ at the University of Oxford/ reported their discovery/ in the publication Molecular Psychiatry.

They say/ the gene/ increases the chance/ of being left-handed. It appears to play an important part/ in deciding/ which part of the brain/ controls different activities. In right-handed people, the left side/ of the brain/ usually controls speech and language. The right side/ controls feelings.

However, the opposite/ is often true/ in left-handed people. Scientists believe/ the gene/ is responsible/ for this. The gene/ showed a link/ with left-handedness/ in nine to twelve percent/ of the population. About ten percent of people/ around the world/ are left-handed.

Here is an interesting fact/ from the Left-Handers Club Web site: five out of the last six American presidents/ have been left-handed. They are Gerald Ford, Ronald Reagan, George H.W. Bush, Bill Clinton and George W. Bush.

The Left-Handers Club/ wants everyone/ to know/ that left-handed people/ may be a little different/ from those/ who use their right hand. But they want left-handers/ to celebrate these differences/ on International Left-Handers Day August thirteenth.