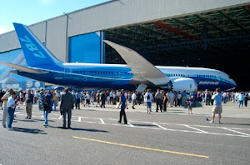 
The Boeing Company/ presented its newest jet airplane/ earlier this month/ to a crowd of employees/ and invited visitors. About fifteen thousand people/ attended the presentation/ on July eighth/ at Boeing's factory/ in Everett, Washington.

The company/ is calling its new plane/ the Seven Eighty-Seven Dreamliner. The plane/ is Boeing's first new jet/ since nineteen ninety-five. The Seven Eighty-Seven/ is designed/ to travel great distances. It can carry/ between two hundred ten and three hundred thirty people.

Boeing says/ the plane/ will be made mostly of carbon-fiber composite material/ instead of aluminum. A plane/ made of carbon-fiber/ weighs less/ than a metal plane. As a result, it requires less fuel/ to do the same job.

Boeing says/ the Seven Eighty-Seven/ will use twenty percent less fuel/ per passenger/ than similarly sized planes. It also says/ the plane/ will make less noise/ taking off and landing. And it will produce less carbon dioxide/ than traditional jets. Studies/ have linked rising temperatures/ on Earth/ to human production of gases/ like carbon dioxide.

The new jet plane/ has yet to leave the ground. Boeing says/ the first Dreamliner/ will be completed/ in the factory/ in Everett. The Seven Eighty-Seven/ still needs flight test/ and other equipment/ to be added. The first flight/ is expected/ in late August or September. Boeing officials say/ they expect the plane/ to start carrying passengers/ in May, two thousand eight.

The company says/ the Dreamliner/ is Boeing's most successful new plane. By July eighth, Boeing had already received six hundred seventy-seven orders/ from forty-seven buyers. The orders/ are worth more than one hundred ten billion dollars.