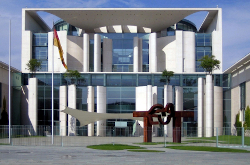 
More women are becoming national leaders. The newest include Angela Merkel. She is expected to become the first female chancellor of Germany on Tuesday. Germany has the biggest economy in Europe.

And, in Liberia, Ellen Johnson-Sirleaf has claimed victory as the first woman elected president of an African nation. She had almost sixty percent of the final ballot count after the vote on November eighth. Her opponent, former soccer star George Weah, disputes the results. But international observers say the election was generally free and fair.

Ellen Johnson-Sirleaf studied at Harvard University in the United States and was an economist at the World Bank.

Around the world, in the past one hundred years, fewer than fifty women have served as heads of state.

Other national leaders in the twentieth century included Indira Gandhi of India, Golda Meir of Israel and Margaret Thatcher of Britain.

Michael Genovese is editor of the book "Women as National Leaders." He says almost thirty women have become heads of state since nineteen ninety.

They include presidents Mary McAleese of Ireland, Vaira Vike-Freiberga of Latvia and Tarja Halonen of Finland. They also include President Gloria Macapagal-Arroyo of the Philippines, and prime ministers Helen Clark of New Zealand and Begum Khaleda Zia of Bangladesh.

American women have been politically active for many years, but they hold only about fifteen percent of government positions. Geraldine Ferraro was a Democratic candidate for vice president in nineteen eighty-four. But the United States has never had a woman president or vice president.

Many political scientists think Senator Hillary Rodham Clinton has a good chance to become president in the near future. The wife of former president Bill Clinton is a Democrat. Other people think Secretary of State Condoleezza Rice would make a good Republican president or vice president.

Some national leaders are not elected but are born into royal families. This week, one member of a royal family, Princess Sayako of Japan, lost her place when she married a commoner.

Japanese law does not permit a female emperor. But things could change. Crown Prince Naruhito has only one child, a little girl. Princess Aiko will be four years old on December first.