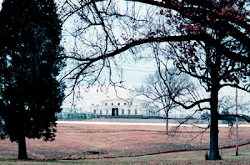 
Fort Knox is the name of an Army base in the southern state of Kentucky. But the name is better known for its link to gold.

Since nineteen thirty-seven, the United States Bullion Depository at Fort Knox has housed a large portion of the government’s gold reserves. The depository is next to, but not part of, the Army base. The building is under the control of the United States Mint, which is part of the Treasury Department.

The Fort Knox Bullion Depository holds over one hundred forty-seven million troy ounces of gold. A troy ounce is a measurement used for jewels and metals like gold and silver.

The amount at Fort Knox is equal to more than four and one-half million kilograms of gold. The gold is in the form of coins and bars. The bars measure about seventeen centimeters long and nine centimeters wide.

In nineteen thirty-three, President Franklin Roosevelt ordered an end to the use of gold as money. The newly elected president did this as part of his New Deal economic plan during the Great Depression. Private ownership of gold that was not in the form of jewelry or collectable coins became illegal.

So people who owned gold exchanged it with the government for paper money. Soon, the government needed a safe place to store its growing amounts of gold. The Treasury Department started building the Fort Knox depository in nineteen thirty-six.

As you can imagine, the building has very high security. In fact, the term “Fort Knox” is used in popular language to describe something that is carefully protected.

The gold is housed in a two-level vault made of concrete and steel. The Treasury Department Web site says no one person knows the code that opens the vault. Instead, several people must each enter a separate code to unlock it.

Other valuable objects have been stored at Fort Knox over the years. These include the Declaration of Independence, the Magna Carta and three versions of the Gutenberg Bible. The Gutenberg Bible was the first major book printed in Europe with movable type.

Don’t get too excited about visiting Fort Knox. The bullion depository is not open to the public.