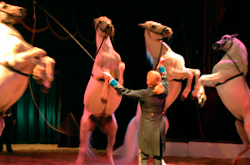 During the civilization of ancient Rome, the circus was a building for large events. These included horse racing, athletic competitions and wild animal hunts.

The eighteenth century British horse expert Philip Astley is often called the creator of the modern circus. He opened a riding school in London where he also performed dangerous tricks for the public. His shows grew to include performances by acrobats, jugglers, clowns and strong men.

Circuses are usually performed in a circular area called a ring. In fact, the word "circus" comes from the Latin word for "circle." Circuses became very popular in Europe during the nineteenth century. Some European cities still have circus buildings which date from this period. These include Paris, France; Stockholm, Sweden, and Blackpool, England.

In the United States, P.T. Barnum developed a circus show that included animals performing tricks and people with unusual skills. P.T. Barnum's Grand Traveling Museum, Menagerie, Caravan and Circus began in eighteen seventy. At the time, it was the largest circus in American history. Two years later Barnum was calling his circus "The Greatest Show on Earth."

The two most famous American circuses were Barnum and Bailey and the Ringling Brothers. By nineteen hundred seven, the two companies merged into one. But they performed separately for twelve years.

It was a major event when a circus such as Ringling Brothers came to perform in a city or town. During the early twentieth century, this circus required about one hundred railroad cars to carry equipment, one thousand workers and hundreds of animals.

Some of Ringling's most famous circus performers included the acrobat Lillian Leitzel, the clown Lou Jacobs and the animal trainer Gunther Gebel-Williams.

Today, the Ringling Brothers and Barnum and Bailey Circus has two separate shows which travel across the United States by train. Another smaller show travels by truck.

Several other groups have reinvented the circus with artistic performances that do not include animals. These include the Cirque du Soleil from Canada, Circus Baobab from Guinea and the Pickle Circus in San Francisco, California.