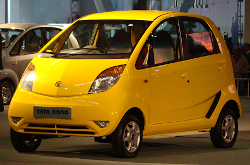 
This week/ the world's lowest-priced passenger car/ was launched/ in Mumbai, India. The Nano, made by Tata Motors, is expected to cause a transportation revolution/ for millions of Indian families.

The small four-door car/ is about three meters long. It will cost one hundred thousand Indian rupees, or two thousand dollars. That is about half the price of similar cars/ offered by the nearest competitor. The Nano/ is expected to make car ownership possible/ for more of India's population. So/ it is being called/ "The People's Car."

The Nano/ is a very simple car. The lowest-priced version/ does not include a radio/ or air conditioning. It has a six hundred twenty-four cubic centimeter, thirty-five horsepower, gas-powered engine. Still, it is a welcomed vehicle/ in a country/ where many families of three or four people/ ride two-wheeled vehicles.

Industry observers/ predict that/ soon roads/ throughout the country/ could be filled/ with Nanos. Tata, India's top automaker, has done almost no traditional advertising/ of the Nano. However, early interest/ in the vehicle/ has been huge. The company says/ the Nano's Web site/ has been visited/ thirty million times.

Tata Motors says/ it will begin taking orders/ for the car/ on April ninth/ both at car dealerships and on the Internet. However, the cars/ will not be ready/ for purchase/ until July. Demand/ is expected to be far greater/ than supply.

Ratan Tata says/ the first one hundred thousand buyers/ of the car/ will be chosen/ by chance. Production of the Nano/ has been delayed/ for several months. Land protests/ last year/ forced the company/ to close its factory/ in the Indian state of West Bengal. A new factory/ is being built/ in the state of Gujarat.

The car/ is expected to be popular/ in industrial as well as developing nations. The company says/ it plans to sell a version of the Nano/ in Europe/ in two thousand eleven. After that, the car/ will also be available/ in the United States. Experts say/ demand/ for low-priced automobiles/ is likely to increase/ as the international economic crisis/ continues.

However, the Nano/ also has its critics. Some say/ the new cars/ will increase India's traffic and pollution problems. However, Tata company officials say/ the Nano/ will produce less pollution/ than any other car/ in the country.