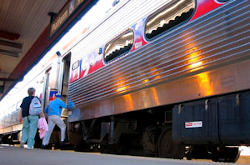 
Most people like driving their own cars or flying in an airplane to get from one city to another. A study from the United States Department of Transportation found that train transportation is unpopular compared with cars and airplanes.

Officials of the department studied how many miles Americans traveled using different ways of transportation in two thousand one. Only trips longer than fifty miles, or eighty kilometers, were part of the study.

Amtrak is the national provider of train transportation in the United States. In the past ten years the number of its passengers increased by eighteen percent. In two thousand four, Amtrak had about sixty-nine thousand passengers a day on average. During the whole year, twenty-five million people rode Amtrak trains, more than ever before.

Although the number of passengers increased, it is still very low. In countries such as France, Germany or Japan, more people use trains. These countries also have nationwide systems of high-speed trains, which the United States does not have.

There are several reasons why many people do not like to ride trains. Americans love to drive their own cars. On high-speed roads, cars can travel as fast as trains. These highways connect all major cities. Many travelers like to be independent. When they use their own cars they can decide when to travel.

In addition, many buses travel between major cities. Bus travel is much less costly than train travel.

In a huge country like the United States, distances between cities are great. In some cases, riding a train from one city to another may take more than a day. Airplanes can carry passengers over long distances much faster. People who do not want to sit in a train for a long time decide to fly. For many people, saving time is the most important thing.