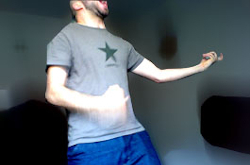 
Anyone/ can try to play the guitar. But it takes a special talent/ to play an invisible guitar. To play "air guitar"/ you move to the music/ as if you are playing an imaginary guitar, maybe like a famous rock musician. Believe it/ or not, air guitar/ has become a competitive sport. We attended this year's United States Air Guitar Championships/ in Washington, D.C.,/ to learn more/ about this unusual activity.

Last week, twenty-five of the top winners/ from cities/ across the country/ gathered/ for this year's United States Air Guitar Championships.

Each performer/ had sixty seconds/ to perform his or her song. Many of the performers/ wore funny clothing/ and wore their hair/ in unusual styles. They made up names/ to go with their air guitar characters.

Three judges/ rated each performance/ based on technical skill, stage presence, and "airness." Event organizers/ define "airness"/ as the ability/ of a performer/ to go beyond playing an imaginary guitar/ to create a new art form. The whole event/ was very loud/ and very funny. Everyone/ pretended to take the event very seriously, which made it/ even funnier.

The United States Air Guitar Association/ organizes the event. It says/ the aim/ is to bring air guitarists/ out of the house/ where they secretly perform/ and onto the world's stage.

We asked competitor Chuck Mung/ from Portland, Oregon/ why he thinks/ air guitar/ is so popular.

"Air Guitar/ is the embodiment/ of the music/ that you hear, and so when you hear a rock song/ that really grabs you, just those steel hooks/ in your rib cage, you start miming it out. Basically, it's like lip synching/ with a guitar."

"The Shred" Kasten/ from Washington, D.C.,/ made it/ to the final round of competition.

"It's a passion/ for the sport, it's like, you can be that rock god/ for a minute, without playing anything. And you know, it's exhilarating."