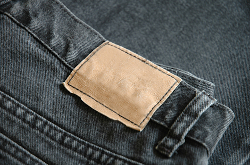 
Jeans are pants made from a kind of cloth called denim. For many people, blue jeans represent American culture.

The history of blue jeans usually begins with a man named Levi Strauss. He did not invent jeans. But he is considered the first person to manufacture and sell this kind of clothing in large amounts.

Levi Strauss was born in Bavaria, an area that today is part of Germany. In eighteen forty-seven he and his family immigrated to the United States.

He opened a small dry goods store, first in New York then in San Francisco, California. Among the products he sold were jeans. These pants were especially useful for miners in California who needed clothing made from a strong material.

Levi Strauss partnered with a clothing maker named Jacob Davis, who had invented a process for making rivets for jeans. These metal devices helped reinforce the blue jean cloth to make the pants stronger.

In eighteen seventy-three, Strauss and Davis received a patent to officially own this invention. They began producing "copper-riveted waist overalls." In nineteen twenty-eight the Levi Strauss company registered the word "Levi's" as a trademark for their product.

Nineteenth century workers would probably be surprised to know that their pants would one day become a fashion object. Today, jeans are worn by people of all ages, incomes and lifestyles. Jeans come in many colors other than blue and in many styles and prices. Fashion designers even create very costly jeans.

The Smithsonian's National Museum of American History in Washington, D.C., has one of the oldest known pairs of Levi's jeans in its collection. Jeans have come to express different ideas about American culture based on the people who wear them. These include the cowboy of the Wild West and famous Hollywood actors like James Dean and Marlon Brando in the nineteen fifties.

Writer James Sullivan published a book called "Jeans: A Cultural History of an American Icon." In the book, he says jeans serve as a sign for two American values, creativity and rebellion.