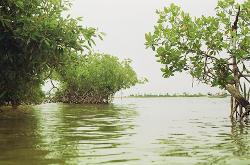 
Mangroves are unusual looking trees. They have roots that stand in saltwater and look like cables or ropes laid one on top of another. Mangroves are not just pretty -- they help the environment. But now the first worldwide study warns that one in six of the many different kinds of mangroves could disappear.

As a result of the study, eleven species of mangrove have been placed on the Red List of Threatened Species. This list is kept by the International Union for Conservation of Nature.

The study appeared in the Public Library of Science journal PLoS ONE. Lead author Beth Polidoro works for the Global Marine Species Assessment Unit, based at Old Dominion University in Richmond, Virginia.

The researchers looked at seventy species of mangrove. They found that all mangrove forests on coastlines are under threat from development, logging or other dangers. But the areas in worst danger are on the Atlantic and Pacific coasts of Central America.

The study says mangrove trees provide more than one and a half billion dollars worth of services to ecological systems worldwide. For example, areas with mangrove forests were not damaged as badly by the Indian Ocean tsunami in two thousand four.

Mangrove forests protect land against erosion from wind, water and storms. They capture and store carbon dioxide, so experts say they can help fight climate change. And they serve as nurseries for shrimp and other saltwater organisms.

Beth Polidoro says about eighty percent of the mangrove area in India and Southeast Asia has disappeared within the past sixty years. Indonesia is said to have lost almost half its mangroves forests within the past thirty years.

Burma, also known as Myanmar, has lost many valuable mangrove trees in recent years. In some areas there, monkeys play in the tops of mangroves thirty meters tall and dolphins swim in the waters of mangrove forests.

One of the rarest species of mangrove trees grows in just a few places in East Asia and India. There are estimates that only about two hundred fifty mature trees of that species remain. Beth Polidoro says they may disappear within the next ten years unless action is taken to protect them.

She says the good news in the study is that some species of mangrove can be reforested relatively easily. But others are much more difficult to restart.