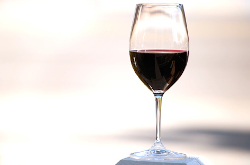 
If you know how to study a glass of wine, it can tell you about its history. Studying a wine involves using several senses, not just taste.

First, pour the wine into a glass and look at it. It might help to put a piece of white paper behind the glass so you can see the color clearly. Color can tell a lot about the kind of grapes, where the wine is from and its age. Look at the clarity, thickness and color of the wine.

The color of red wine can be purplish red to brick red. Red wines often become paler with age. Red wines grown in warmer climates often have deeper color than those grown in cooler climates.

Next, turn the glass so that the wine moves around inside. This brings air into the wine, so that it releases its smell. Smell the wine deeply. A wine’s smell is actually more telling than its taste. To use a wine term, what can you learn about the wine from its “nose”? Is the wine fruity? Does it smell like oak? Do you smell grass or maybe honey? Maybe the smell is like butter or a mineral. It may be complex or intense.

Now it is time to taste the wine. Move it around in your mouth. You may recognize some tastes because you identified them while smelling the wine. You can also consider the wine’s sweetness and its sharpness, or acidity. You may note the taste of tannin. Tannins are chemicals that are found in the skin and seeds of grapes. They are also found in tea. Tannins taste bitter and seem to coat your mouth. To make a good wine requires a balance of sugar, acidity, tannin and alcohol.

Professional wine tasters have many special words to describe wines. Some adjectives might be surprising. For example, a wine that feels smooth might be described as “velvety” or “silky.” A wine that does not have enough acidity is “flabby” or “fat.” A wine with a strong tannin taste could be “chewy.” And white wines with a lively taste could be described as “crisp”, “zesty” or “steely.”

Many wine experts can identify the kind of wine without ever seeing the label on the bottle. This is because they know the qualities of the look, smell and taste of a wine.

One famous wine-tasting helped change the history of the wine industry in the United States. The Paris Wine-Tasting of nineteen seventy-six is also known as the Judgment of Paris. A British wine expert organized a wine-tasting in France. He invited producers of California wines to take part in the competition against the most famous producers of French wines. At the time, France was known for producing the best wines in the world. California wine was relatively unknown outside the United States.

The top food and wine experts from France were the judges. They did a “blind” tasting, meaning they did not know what wines they were drinking. The winners for both the red and white wine categories were California wines from Napa Valley. Many wine experts were shocked. This event helped change opinions about wine produced in the United States.

The wine industry has changed a great deal since the nineteen seventies. The United States is now the fourth largest producer of wine in the world. California produces about ninety percent of the wine in the United States, followed by the states of New York, Washington and Oregon.

Americans are also drinking more wine than ever before. Industry studies show that the amount of wine drunk in the United States has been steadily increasing for the past sixteen years. In fact, Americans now spend more money on wine than any other country in the world. Industry experts say the United States will soon pass France and Italy as the top consumer of wine by volume.

Even the recent economic recession has not stopped Americans from drinking wine. Reports say Americans are buying more wines in stores rather than ordering them in restaurants. Other experts say the recession has made Americans explore and discover wines that are less costly.

We talked with wine expert Steven Kolpan about his thoughts on the wine industry. Mr. Kolpan is a writer and a professor of wine studies at the Culinary Institute of America. We asked Mr. Kolpan what areas of the world are producing interesting wines these days.

Steven Kolpan also discussed another emerging country in the wine industry. In two thousand eight, China was listed as the seventh top wine-producing country in the world. "China is positioning itself to be a very strong player in both the import market in their own country but also their domestic market. And I think they would like to have a presence in the export market as well.” He says it might not be long before China is producing top quality wines.

One major trend in the wine industry today is the growing effort by producers to make wine in a way that does not harm the environment. Many producers are making organic wines, or wines that are “sustainably” grown. Efforts to be more “green” include using water more responsibly, reducing chemicals used to kill insects and rethinking the wine bottle.

Even one of the most traditional wine areas in the world is making some major changes in an effort to be more green. The Champagne area of France is famous for its sparkling wine. Producers there are working to reduce the amount of carbon dioxide emissions spent transporting wine around the world. One way they have done this is to make wine bottles lighter so they require less energy to transport.

The newer Champagne bottle only weighs about sixty-five fewer grams than the traditional nine hundred gram bottle. But this small change could make a big difference in the future. The Champagne industry says carbon pollution could be cut by eight thousand metric tons a year once all producers use the lighter bottle.

“We are going to see a huge shift in the wine market due to climate change. And, I think California is going to be deeply affected by it because the climate models for the immediate and long term future in California are not at all promising for wine.”

To face climate change, producers might have to move their vineyards to cooler areas. Or, they might have to grow a kind of grape that can survive in higher temperatures.
In the future, rising temperatures may open up possibilities to countries that otherwise could never compete in the wine industry.

Steven Kolpan has been working with wine for more than thirty years. But he says he is still surprised by its qualities. He reminds us that a glass of wine is made up of water, alcohol and a small percentage of chemical substances. And yet he says: