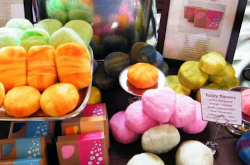 While washing your hands have you ever wondered what materials are in a bar of soap and why it cleans? Today we answer that question with a visit to a soap maker at her home in Falls Church, Virginia near Washington. Mary Kearns creates soaps that contain inventive combinations of herbs and essential oils. She uses organic and fairly traded ingredients. And she takes great care to operate her Herban Lifestyle business in a way that is environmentally friendly.

At the ArtSpring store in Silver Spring, Maryland, visitors can buy products made by local artists and artisans. They might notice some soaps wrapped in colorful paper. This is one of several places where Mary Kearns sells her Herban Lifestyle soaps and other body products.
“People love natural soaps. I love seeing people’s reactions when they pick up a bar and smell it and get a smile on their face.”

One way to learn more about soap-making is to watch Mary Kearns at work. She shows us the ingredients she will use. They include water into which she has dissolved lye, or sodium hydroxide. She warns that working with lye can be dangerous because it burns the skin. She makes sure to wear special protective glasses and gloves when making soap.

Oil is the other important ingredient in soap. Different oils give a soap different properties. For example, olive oil makes a harder soap, while coconut oil makes a soap that produces suds.
“I use organic coconut oil. Actually, all organic oils. And the palm kernel oil is organic and sustainably harvested.”

Once the ingredients have been gathered and measured, it is time to start mixing them together.
“Pretty basic ingredients. Three kinds of oils, water, lye. And then I mix it together. This is where the magical part happens.”

First, she adds the water and lye solution little by little to a large pot of heated oil. Then, she uses an electric blender to mix the oils with the lye and water.
When the soap has reached “trace” it means the liquid soap has come to a point where it will not separate back into oil and water. She then adds exact measurements of herbs or flowers and essential oils.

She adds the dried herbs and flowers for looks and texture. The essential oils give the soap its intense smell. Ms. Kearns has many bottles of different kinds of essential oils that she buys from special organic producers.
Smelling the oil she has in the kitchen now is like breathing in an entire field of lavender flowers. This is exactly the kind of soap Ms. Kearns is making right now. She grows some herbs and plants in her garden. She buys the others.

Not all Herban Lifestyle soaps contain essential oils. Some people’s skin is too sensitive for essential oils, so Ms. Kearns also makes soaps that have no intense smell.
“About half of my soaps have no added essential oils, it’s for people with very sensitive skin who want to avoid essential oils for any reason. And then the other half, I have fun playing with the different scents”

Next, she pours the liquid soap into wooden mold forms. The forms make small rectangular soaps or large bricks of soap. Ms. Kearns puts paper on top of the molds. She lets them sit for a day or two in a warm place so the soap can dry and harden.

Later, she takes the soap out of the mold and places it in a storage area to cure or dry for four to six weeks. This curing process permits water to evaporate from the soap. The soap soon becomes firmer which helps it last longer.

Understanding soap-making also requires a short chemistry and history lesson. Soap is made from a chemical reaction called saponification. During saponification, an alkali base such as sodium hydroxide reacts with a fat. This forms a small amount of alcohol called glycerol and a metal salt of fatty acids, or soap. Soap cleans because its molecules attach to nonpolar molecules like oil and polar molecules like water.

No one knows exactly when humans first developed soap. Archeologists have found containers filled with a material similar to soap while studying the ancient cultures of Babylon and Egypt.

One story says that soap got its name from Mount Sapo, a place where ancient Romans used to sacrifice animals to their gods. Rainwater washed melted animal fat and wood ashes down the mountain into a river where women were washing clothes. The women found that the ashes and fat combination made their clothes much cleaner. The story may not be true. But it is likely that the discovery of how to make soap may have been accidental.

Soap businesses began to appear in England, France, and Italy during the Middle Ages. By the twelfth century, soap- making centers had developed in cities such as Marseilles, France and Savona, Italy. Later, Bristol, England also became an important city for soap production. Two scientists helped modernize soap production. The French chemist Nicolas Leblanc discovered how to make soda ash from salt in the late eighteenth century. As a result, soda, a main material in soap, became easier to make.

About twelve years ago, Mary Kearns bought a kit for making body care products at home. She discovered that she really enjoyed making soaps. She would sometimes sell them at her local farmer’s market. But it was her main career in psychology that took up most of her time.

A few years ago, Mary Kearns returned to her love of soap-making and established her Herban Lifestyle business. She says she uses both her undergraduate and graduate training for her business. She has also studied the medicinal properties of herbs and plants.

Herban Lifestyle soaps are influenced by the natural colors and smells of the plant world. Mary Kearns points to a large collection of dried plants and herbs that go into making her soaps. “It’s amazing the variety of colors, textures and scents that are just in natural plants. You don’t even need to use artificial colors. The rainbow is there.”

One soap she makes is called “If They Bathed at Woodstock”. It contains hemp oil as well as the smell of orange and patchouli. “It’s a Sunshiney Soap” has a bright and pleasing smell. It contains calendula flowers and tangerine essential oils.
She also has soaps that are very popular with men. Her “MAN Beer Soap” is made from palm, olive and coconut oil. And, it has one unusual ingredient -- beer. Ms. Kearns says beer is soothing to the skin and keeps it soft.

Many Herban Lifestyle soaps come wrapped in colored paper. Ms. Kearns chooses papers made from recycled materials, often with colors made from soy ink. One line of soaps has a very unusual wrapping. Her fuzzy soaps look like balls of wool, and they are, sort of. These soaps are tightly wrapped in brightly colored wool. As the soap dissolves, the wool slowly shrinks around the soap. Ms. Kearns says the wool serves several aims. It acts like a washcloth, helps remove dead skin cells and makes the soap last longer.

Herban Lifestyle produces about three thousand bars of soap every year. The soaps are sold on the company’s website, and on other websites including Etsy and Ebay’s socially responsible store called World of Good.

Mary Kearns also sells her products at craft fairs and at stores in Washington, D.C, Maryland, Virginia and California. At eight dollars a soap, these products cost more than commercially produced soaps. But she says more and more people are willing to pay more for natural, hand-made products.
“It’s in the last ten or fifteen years that people are going back to the artisan style soaps in a big way.”

We asked Mary Kearns for her advice when shopping for a bar of soap. She said to look for ingredients that you would eat, other than lye, of course. She says to look for pure oils and avoid unnatural fragrances, which can contain harsh chemicals.