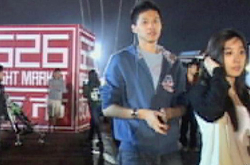 
Night markets in Asia are places where people enjoy street food and social gatherings. "This is something we need." In Southern California, the 626 Night Market in Los Angeles reminds George Ge of a night market in Taiwan.

"Everything is cheap and food, not very clean but taste awesome." Six-two-six is the telephone area code for a mostly Asian neighborhood of Los Angeles. Jonny Hwang is one of the organizers of the 626 Night Market.

"Thailand, China, Korea, Japan have different variations of it. It's a staple of Asian societies there. Night markets have been around every day, every weekend. Thousands of people, people of all ages, families come out to have a good, safe time."

The 626 Night Market is like a market in Asia but it has a Los Angeles style. Aileen Xu enjoys it. "What we have here is literally a huge melting pot, it's a fusion of all different Asians, and I mean, I think it's really representative of the Asian American population in L.A. because we're not all Chinese. We're, you know, Chinese, Japanese, Korean, Vietnamese. We're everything and we're mixed, and we have, we even have foods that are like Asian Latino."

And there is another difference with the night markets in Asia. This one in Los Angeles does not happen regularly. Jonny Hwang has only been able to organize a few night markets so far.

"Having this type of event of this scale in America, in LA, is very difficult. It's not like Asia where the rules are lax and you can almost do anything. Here, it’s a lot more structured."

He wants this night market to be held more often. He says it is a social event, but also good for the local economy. "A lot of our vendors are local small business. A lot of them are entrepreneurs, first timers, and I think without this event, this platform, they would be hard-pressed to find places that they can participate."

The people who sell food and other products at the night market also have stores and restaurants, many of them in the local neighborhood. The night market lets them show their products to thousands of people in one night.

John Zhuang sells Taiwanese beef jerky, preserved plums and candied fruits. He says having a food stand at the night market will help his business.

People from as far east as New York and as far north as the Canadian city of Vancouver have visited and asked for the night market to continue. Organizers say they are working to have the 626 Night Market become a monthly and possibly even a weekly event.