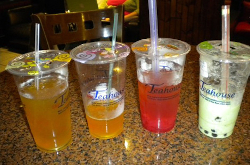 On any given night, college students and young workers crowd into the Factory Tea Bar. The room is filled with comfortable couches and other seating. The light is low. The bar serves no alcoholic drinks. People come here for sweet tea. It is often served with ice, milk and boba from Taiwan. Boba are large, chewy balls of tapioca.

Tiffany Porter is an American-born Chinese college student. She visits the Factory Tea Bar often. “The boba place is like unique to Asian people, and so if you want that Asian comfort you come to a boba of place, and so that you can feel at home with a lot of other Asian people.”

Oliver Wang says the current generation of Asian-Americans grew up seeing more Asian faces on television locally and through satellite. He says Asians are no longer stereotypes. And now they can see how other Asians like to be seen, like in the music video “Boba Life,” created by comedians The Fung Brothers.

David Fung says boba is to the Asian-American community what Coca-Cola is to the rest of America. “I know boba is even more ubiquitous in Taiwan than here, but they don’t have the same culture built around it.”

Boba cafes are supported by people from throughout Asia who live in southern California. Lina Yaore, an Indonesian-American, likes to socialize at boba cafes with her Indonesian friends. “We like relaxing. We like chatting and then we like to enjoy the drink.”

Chatchawat Rienkhemaniyom is from Thailand, but he knew boba teas have international appeal. That is why he opened the Factory Tea Bar. He says the business is very healthy and growing. Boba has become life, become one of their life, like a part of their life.”

And that way of life is spreading across the United States, says Andrew Fung of the Fung Brothers. “On every college campus, there’s enough Asian people. There’s enough Chinese people, there’s enough Taiwanese people, where they’re going to have one boba shop no matter how crappy it is, and all the Asians know about it.”

Boba cafes have become a sign of a cultural movement among Americanized Asians who are still connected with their ethnic identity, but proud to be Asian American.