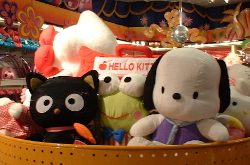 It could be used to describe something that happens over the course of a person’s life. For example, “I know a man who lived in the same country village his entire life -- from cradle to grave.” That is a literal use of the expression.

This expression is often used in business, meaning the entire life cycle of a product or process. Here is an example:

"Marcia is responsible for the life of this product from beginning to end."
"In other words, she’s in charge from cradle to grave."
"Correct. Check with her before changing anything."

Another less common way to say cradle to grave is womb to tomb. But that one rhymes.

Everything but the kitchen sink is an expression that means a person included a lot of stuff ? maybe too much stuff.

Let’s say my friend is going camping for the weekend. And he packs too many things -- things he won’t possibly need, like an iron, a toaster and a television. I could say, “He prepared for a weekend of camping and packed everything but the kitchen sink!”

This expression may have come from a practice in the 1600s, where land was distributed in a sort of lottery. The amount of each portion of land was concealed in a ball of wax and then drawn from a hat. But no one knows for sure if this is the origin.

The origin of the whole nine yards is even more mysterious. It could come from the military, sports or even Scottish dress for men.

If you like to use expressions with known origins, use the whole enchilada. An enchilada is a Mexican dish. Vegetables or meat fill a tortilla, and is topped with a sauce. The whole enchilada means the entirety of something, especially something impressive or outstanding.

For example, “He has a job with money, respect, and personal satisfaction -- the whole enchilada!”

The word ”shebang” is also used this way. In fact, people used the whole shebang without knowing what a shebang actually is. Word historians do not agree on where “shebang” comes from either. One of the first recorded uses of the whole shebang, meaning everything, is in the late 1800s.

If you like expressions that are fun to say, use the whole kit and caboodle.