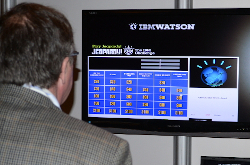 
Computers and other machines have and will continue to change the way people do business and how we live.

Many researchers use the term artificial intelligence (AI) to describe the thinking and intelligent behavior demonstrated by machines. While AI can be helpful to human beings, scientists warn, it can also be a threat.

We live with artificial intelligence all around us. A few examples are iPhone’s personal assistant Siri, searches on the Internet, and autopilot programs on airplanes. AI is not new. But it is quickly getting more and more complex, and, well, more intelligent.

Stuart Russell teaches computer science at the University of California, Berkeley. He says humans should be sure to make AI products that we like.

”If we are going to make systems that are going to be more intelligent than us, it’s absolutely essential for us to understand how to absolutely guarantee that they only do things that we are happy with.”

In the future, Russell says, many of today’s jobs that require a lot of physical labor will be replaced by machines with artificial intelligence. These include agricultural jobs, and ones with repetitive duties like telephone call centers. AI machines could also replace jobs like ones in the financial industry ? jobs that require studying a lot of data.

Russell sees artificial intelligence changing the economy and current way of life. “Most people will be employed, possibly even self-employed, in providing individualized personal services to other human beings, that we won’t have mass employment in manufacturing or in financial services.”

He says that means the large factory, or large office building with thousands of people doing the same thing, will go away.

Guruduth Banavar is IBM’s Chief Science Officer of Cognitive Computing. He sees a future where new jobs such as data engineering will be created.

”The future will require everybody to work with these learning reasoning machines. So I think the skill set for many of these jobs will end up being different in the future.”

The health care industry is one area artificial intelligence is already changing. AI can process huge amounts of data, so doctors can use the most up-to-date information to diagnose and treat patients.

IBM’s Watson technology is already in use at hospitals in North and South America, Europe and Asia. Banavar says Watson helps doctors keep up with information.

“The difference between going to a doctor who has Watson versus not having Watson is very big, because when doctors, you go to a doctor today you might find somebody who is 10 years out of date.”

There is also a dangerous side to artificial intelligence. One example is combining drone aircraft technology and AI to create autonomous weapons.

Stuart Russell is working to create international treaties to ban such weapons. He says the risk is that people will use this technology to develop a kind of “poor man’s nuclear weapon.”

IBM’s Banavar points out the value of artificial intelligence, including search engines and the autopilot function on planes.

The debate about whether artificial intelligence is good -- or bad -- for humans continues. Researchers agree there is no question that the technology is here, and will continue to change life on our planet.