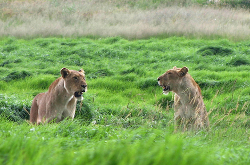 Lubbe quickly began taking video of the wild animals. She posted the video on Facebook this week. People from around the world commented about how calm she and her friend in the tent remained when they saw the lions so close. People were also impressed that they decided to take a video.

Lubbe was camping in a tent at a national park on the northern border of South Africa near Botswana.

The lions are the most famous creatures in the national park. They are called Kalahari lions. They get their name from their home -- the Kalahari Desert. It covers parts of South Africa, Botswana and Namibia. Female Kalahari lions weigh about 150 kilograms.

Lubbe responded to the many comments about her video. She called the experience “a privilege” and “very special.”

She said the cloth door of her tent was open, but the lions did not enter. Along with the 36-second video, she posted photos to her Facebook page of the lions exploring her camp.

There are images of the lions looking into the tent from outside, and looking at a barbecue grill where campers cook.

People around the world reacted to the video on Facebook and Twitter. And, news organizations also did stories about Lubbe’s morning lion visit.

One person wrote: “Stunning experience, but I think I would have wet myself!” Another commented: “I’ll bet your heart was racing! What a unique experience!”

Twitter user Mariana who is from New Jersey tweeted that her mother saw the lion video. Her mother then warned her not to go camping anymore, even though New Jersey is very, very far away from the Kalahari Desert.