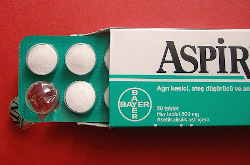 “An apple a day keeps the doctor away” is a popular expression in the United States. It may be a common saying, but it is not scientifically confirmed. However, a new study adds to evidence that suggests taking a small amount of aspirin can help to keep the doctor away.

Researchers have known for some time that a small daily dose of aspirin can be good for your health. Aspirin can lessen the risk of developing heart disease and even colon cancer.

New findings suggest the painkiller may also increase survival in cancer patients by up to 20 percent. That is, if those patients are receiving chemotherapy as a cancer treatment. Chemotherapy uses drugs to destroy cancer cells.

Peter Elwood is with Cardiff University's School of Medicine in Britain. Forty years ago, he was involved in the first study to explore the effects of aspirin in the prevention of heart disease.

Elwood's team examined 47 studies for evidence that aspirin helped cancer patients. And they found some.

"And there's fairly consistent evidence of a 15 to 20 percent reduction in death and a reduction in metastatic spread, by low dose aspirin." By low dose, he means 81 milligrams. The study followed cancer patients for five years.

Elwood says the evidence is strongest that aspirin delays death among colorectal cancer patients. His team found that aspirin also helped people being treated for breast and prostate cancer.

The reason appears to be the chemical salicylate. Elwood says many people have small amounts of salicylate in the body.

In about 20 percent of patients, researchers have found a genetic mutation that may interact with the chemical. The mutation is known as PIK3CA. This change in the structure of genetic material could explain the reduction in colon cancer.

Elwood says he was excited with the study’s findings. He adds that it is not a cure but a small sign of better things to come, what he calls a glimmer of hope and encouragement.

"Well, I feel very gratified because given the diagnosis of cancer. It's not a cure but it's a glimmer of hope and encouragement to them. So, I am thrilled to have this evidence from the study."

Elwood says that if doctors told him he had cancer, he would not delay in taking aspirin once a day. But he says that decision is up to the individual.

"If you asked me personally what I would do if I had a diagnosis of cancer, I would say I would have no hesitation in taking it. But I do not recommend it to people. I want them to have the evidence and take (make) their own decision."

The only major risk is that aspirin can cause stomach bleeding. But Elwood says it is usually does not cause death. He adds that the evidence points to big health benefits of taking a daily aspirin. So, for some people, the pros might outweigh the cons. Elwood and his team published the findings in the journal PLoS One.