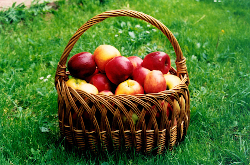 
Today let’s talk about apples. The saying “as American as apple pie” describes things that represent the best of American culture. People use this expression when talking about things like blue jeans, baseball and rock-n-roll music.

But why use apple pie? Why not some other fruit, like a cherry or peach? The reason might be a man known as Johnny Appleseed.

A lot of stories and even a few poems have been written about Johnny Appleseed over the years. They made him into a larger than life folk hero.

Yet Johnny Appleseed was a real person. It was the name given to a man named John Chapman. Many Americans consider him responsible for popularizing apples in the United States.

John Chapman was born in Massachusetts in 1774 during the Revolutionary War against Britain. His father reportedly fought at the Battle of Bunker Hill and later served under General George Washington. While John’s mother died in childbirth, his father made it home from battle. He taught his son everything he knew about farming.

The young Chapman took his father’s lessons to heart. For 40 years, Johnny Appleseed is said to have cleared land and planted apple seeds in the Midwestern states of the U.S. In a short time, the seeds grew to become trees that produced fruit.

Apples were an important food for the early American settlers. Apples offered something different in daily meals. They were easy to grow and store for use throughout the year.

Perhaps the story of Johnny Appleseed has made apples and apple pie so very American. Historians can debate that. But this we do know. Apples are at the core (Get it? “Core” is the center of the apple.) of many common sayings.

Many apples fall from trees when they are fully-grown. When we say that an apple didn’t fall far from the tree, we are describing children who are very much like their mother or father. And this can be for both good and bad reasons. As we said, John Chapman’s father was a farmer. So, we could say that Johnny Appleseed’s apple really didn’t fall far from the tree. That takes this expression to a whole new level!

Naturally, apple growers need a way to transport their produce to market. This is where a vehicle called an “applecart” enters the story.

It must have been a big mistake years ago to upset or overturn someone’s applecart. In American English, you have upset the applecart if you ruin someone’s plans or go against the usual way of doing things.

In fact, the Merriam-Webster Dictionary defines an applecart as “a plan, system, or situation that may be disrupted or ended.” But the verb used with the applecart expression is usually “upset.”

The first recorded use of applecart being used in this way appeared in 1788. A man named Jeremy Belknap wrote in The History of New Hampshire that "(John) Adams had almost overset the apple-cart by intruding an amendment of his own fabrication (making) on the morning of the day of ratification" [of the Constitution].

This is yet another example of how apples seem very American. The only thing bad about an upset cart of potatoes, for example, is that potatoes are all over the ground.

So, the word apple appears in many American expressions. But does that mean we should eat one every day? You would think so, if you hear the saying, “An apple a day keeps the doctor away.” That is not scientifically proven. But eating an apple a day can’t be bad for you.

Apples are about 85 percent water. They can help you feel full. Also, they travel well. In other words, they rarely get damaged when you carry them in a bag, unlike other fruits (Yes, I’m talking about you, Banana!).

So, apples are good for us. And someone who does good things can be described as a good apple.

But there are also bad apples. And we all know that one bad apple spoils the bunch. Let’s say there is a classroom of very well-behaved children. All the students are respectful. They do not shout or speak out of turn while the teacher is talking. Then a new student arrives. This student talks loudly and shows disrespect to the teacher. Soon other students follow her lead and disrupt class.

In this example, you could say that one bad apple spoiled the whole bunch. Now, students who misbehave in class are not necessarily bad people. But, if the student we just talked about also steals apples from the store and then throws them at very old women, you could say she is rotten to the core.

Even a bad child can be loved by their parents. The father of this girl might say, “My daughter would never do such things! She is the apple of my eye!”

But this student is not the apple of the teacher’s eye. The teacher punishes her and the class returns to the way it was. The other parents are very happy about this. They might even say, “How about them apples? Or “How do you like them apples?”

This expression is the same as saying, “Well. What do you think about that?” It can also be a way of showing you like or admire something.

I know. I know. The grammar in the expression “how about them apples” is not exactly right. But that is how we say it. Americans even shorten the word “about” to simply “’bout.” You won’t hear anyone say, “How about those apples?”

The grammar is main reason this expression sounds warm, folksy and rural to the ear -- well, the grammar and the apples.

And remember, it sounds like a country or rural expression. If a good friend tells you that their original cake recipe just won first place at a baking competition. “How ‘bout them apples?!” would be a great response to that news. However, if a friend from New York City tells you that they just won a high-profile writing award, you might want to say something else.