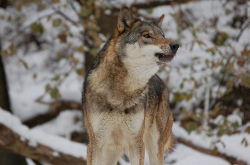 
Wolves are important animals in the traditions and stories of most Native American tribes. To Native Americans, wolves often represent bravery. The animals also are signs of strength, loyalty, and success at hunting.

Other cultures -- such as the ancient Celtic and Nordic peoples -- also placed high value on wolves.

However, something happened. Perhaps wolves attacked too many people or ate too many farm animals.

Whatever the reason, wolves were killed in many areas. So many died that they nearly became endangered. They also became known as villains.

From the werewolves in horror films to the wolves in children’s stories, wolves get a bum rap in both literature and English expressions.

For starters, there is the term lone wolf. The lone wolf isn’t a bad person. But they like to do things on their own. However, the term can mean something less than desirable. Lone wolf makes you think the person doesn’t want to be around people because he or she dislikes them.

In news stories, you sometimes hear the terms “lone wolf attacker” or “lone wolf shooter.” These individuals are not part of a larger group carrying out an attack. They are acting alone.

Now, let’s move on to the home. Parents might criticize their children for wolfing down their food. In other words, the child eats very quickly and without care.

And if someone says a child was raised by wolves, that child has bad manners and is behaving like a wild animal.

A wolf call is a whistle, howl or other noise made by a man to show that he likes the way a woman looks. But a wolf call is not a nice thing. These men sound wild and rude. And trust me, most women really hate wolf calls. So, they don’t win a man any points in the game of love.

The first fairy tale is about three pigs who live in houses made of different materials: straw, sticks and brick. They have big trouble when the big bad wolf comes to the door of each house.

Wolf: Little pigs, little pigs, let me in.
Three Little Pigs: Not by the hair of our chinny-chin chins!
Wolf: Then I’ll huff and I’ll puff and I’ll blow your house in!”
It isn’t until the pigs hide in the house of bricks that the wolf finally meets his match.

And then there is the story of Little Red Riding Hood. She had wolf troubles, too. After the Big Bad Wolf eats her Grandmother, he turns to Little Red. The wolf put on the grandmother’s clothing in an effort to fool the little girl. But sensing something is not right, she makes several comments about her “grandmother’s” appearance.

So you see, it seems that there is nothing good to say about wolves in our stories or expressions. By the way, there are two popular wolf-related expressions that come from Aesop, the ancient Greek storyteller.

The first is a wolf in sheep’s clothing. Here is how the story goes:

Once there was a wolf who lived near a sheep farm. You would think this would be great luck for the wolf. He could eat all the tasty sheep he wanted. But on this farm was also a hardworking shepherd and his dog. They guarded the sheep so well that the wolf had no luck catching a meal. He was growing hungry.

One day, the wolf found the skin of a sheep on the ground. This sheep skin gave the wolf an idea. He put on the pelt, wearing it like a coat. Then the wolf walked among the sheep like he was one of them.

As the wolf began looking for his next dinner, a tiny lamb began following him. The wolf wearing the sheep’s “clothing” led the poor lamb apart from the flock. When he had the animal alone, the wolf ate it!

What can we learn from this story? Don’t be fooled by appearances. A wolf in sheep’s clothing describes someone who acts and looks nice on the outside but is bad on the inside.

Aesop’s other wolf fable also involves a shepherd, but not a hardworking one. No, this shepherd caused a lot of trouble. He is known as the boy who cried wolf:

Once a shepherd boy sat on the hillside, watching sheep for the village. He didn’t like the job. So, he thought of something to pass the time and have fun. He began shouting, “Wolf! Wolf! The wolf is attacking the sheep!"

The villagers came running up the hill to help the boy drive the wolf away. But when they arrived, they didn’t find a wolf. They found only the shepherd boy laughing at them.

The villagers were angry. They said, "Shepherd boy, don't cry 'wolf', when there's no wolf!" They went back down the hill, still angry from his trick.

But it was so much fun tricking the villagers that the boy could not help himself. He did it again. To his delight, he watched the villagers run up the hill again to help him drive the wolf away.

When the villagers saw no wolf, they said, "Save your frightened song for when there is really something wrong! Don't cry 'wolf' when there is NO wolf!" But the boy just smiled and watched them return down the hill once more.

Later that day, the shepherd saw a REAL wolf nearing the sheep. Frightened, he jumped to his feet and shouted as loudly as he could, "Wolf! Wolf!"

The villagers heard him. And they ignored him. They thought he was trying to fool them again. So no one came to help.

At sunset, everyone wondered why the boy hadn't returned to the village with their sheep. They went up the hill and found him crying.

"There really was a wolf here! It ate some sheep. And the flock has scattered! I cried out, ‘Wolf! Wolf!’ Why didn't you come?"

An old man tried to cheer up the boy as they walked back to the village. "We'll help you look for the lost sheep in the morning," he said, putting his arm around the youth. "Nobody believes a liar ... even when he is telling the truth!"

Isn’t that the truth! People who cry wolf are not trusted. People are so familiar with this story, you simply have to say cry wolf for them to know what you mean.