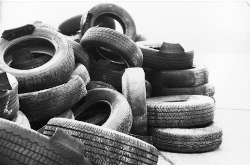 Researchers say they have created a new synthetic rubber that could be used to make biodegradable tires.

A team at Texas A&M University’s campus in the Gulf nation of Qatar is testing the synthetic rubber.

One of the researchers, Robert Tuba, said the goal is to find a way to make fully recyclable tires.

Rubber tires thrown into landfills decompose very slowly. They are a fire risk and can release chemicals into the soil. If they collect water, they can also become a breeding ground for mosquitoes.

The research team discovered a by-product of the oil refining process called cyclopentene. This was combined with a polymer to make a substance very similar to natural rubber.

The new synthetic rubber is being tested to see if it can be mixed with metal and other materials now used in making tires. The goal is to produce a new kind of synthetic that is just as strong as the rubber now used, but is biodegradable.

The team said they found other benefits of the synthetic rubber. For one thing, they were able to recover 100 percent of the original materials when the rubber decomposed.

The researchers say they already have a partner in the rubber industry. If future tests go well, Robert Tuba said his team would be ready to “bring the material to market.”