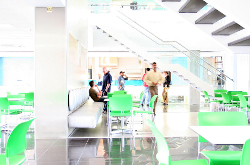 
The latest generation of Americans to enter the labor force may be reshaping the way the United States goes to work.

Millennials are the generation who reached adulthood around the year 2000. And many of them do not have the usual 9-to-5 work mentality.

The Millennial workforce wants to work a more flexible schedule. This could mean the end of the inflexible 40-hour work week.

A professor at Florida International College of Law in Miami, Florida explains that Millennials value their free time. They value their personal lives -- their friends, hobbies and interests -- as much as they value work. That attitude may sound like a benefit to only the workers. But perhaps not.

Professor Kerri Stone says studies show that reducing working hours can actually result in better workplace productivity. Stone says that after working so many hours per week you reach the point of what she calls, “diminishing returns.”

Diminishing returns is an economic term. It refers to a “point at which the level of profits or benefits gained is less than the amount of money or energy invested.”

She adds that people need breaks during the day and during the work week. During a work day, they need “face time” to talk to a friend or colleague. Without planning it, they build this time into their work day.

Employers are not often worried about work-life balance. They are concerned with the bottom line, the profits and results of the company. However, new studies show that a happy employee is good for the company’s bottom line.

An organization based in Seattle, Washington seeks to challenge what it calls the epidemic of overworking in the United States and Canada.

Take Back Your Time states that its goals are to change the work culture by: reducing work hours, guaranteeing paid vacation and guaranteeing at least one week of sick leave.

The organization says that giving employees at least one week of sick leave will help to reduce damage to a person's health and relationships caused by working too much.

Ted Bililies is a psychologist and managing director of a company that advises other companies on how to work smarter. He agrees that in the U.S., there is a work epidemic or as he calls it, “workaholism."

He warns that “stress is not uncommon in the workplace, along with physical and mental health issues.” Bililies adds that stress often leads to heart disease and other sicknesses.

The U.S. Centers for Disease Control and Prevention agree. The CDC’s National Institute for Occupational Safety and Health (NIOSH) states this on its website: “Stress is a prevalent and costly problem in today’s workplace. Additionally, periods of disability due to job stress tend to be much longer than disability periods for other occupational injuries and illnesses.”

Bililies says that to fix the problem of an over-stressed employee, companies can give employees greater choice regarding how they work. Many companies have already started doing just that.

For the past year, a small company in San Diego, California, called Tower Paddleboards, has started a revolutionary substitute to the 40-hour-plus work week. They have started a five-hour workday for their 11 employees.

Stephan Aarstol is the founder and CEO, chief executive officer. He challenged the 8-hour workday, calling it "something that was invented for factory workers 100 years ago."

Aarstol defends his employee program, saying that it helps to keep his employees healthy. He says that these days, people are not active enough. He adds that “disease is on the rise.” Prescription drug abuse and alcoholism are also on the rise.

He says he believes that making a little more money for many more hours does not make people happy. The five-hour work day, he suggests, gives people time to do other things in life, such as spending more time with family and friends.

So how has this affected his company’s bottom line? Aarstol’s company reports that it is more profitable than ever.

But does a reduced work day result in more productivity? Dan Ariely is professor at Duke University in the southern state of North Carolina. Ariely says there are basically three things people do at work. They:

do productive, thoughtful, deep useful work, do mindless work that has to be done, and waste time.

If you decrease the work day from 8 hours to 5 hours, he says, what will be lost is the meaningful work.

There is a push by some workers to reduce their hours at the office. However, some of American's best-known companies are known for their highly-driven, "workaholic" culture.

Aarstol says that companies are trying many different things to see what works. He adds that Tesla, Apple and Amazon have teams of workers “that are super-high performers. These people are working around-the-clock, 24/7 with smartphones and computers, and they are accomplishing some amazing things."

This was his own firsthand experience. He warns that a person can easily work themselves into this unhealthy lifestyle of over-working. For Aarstol and some other corporate executives, the balance is to have happy, productive employees and a profitable bottom line.